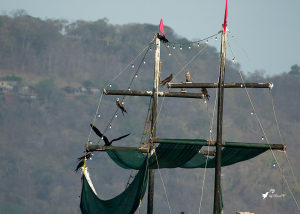 Today we got up early to check out all the birds we would hear from our veranda while resting on the hammock. Since we do not know how to identify them by sound, we had to go look for ourselves. We took a morning walk around the resort and saw some new birds like Red-Lored Parrots, Hoffman’s Woodpeckers, Rufous-naped Wrens, Tropical Kingbirds building a nest in tree next to the pool and some Mangrove Hummingbirds. We finally got to see a Ruby-throated Hummingbird but we did not recognize her. Nor did she us. We walked out to the beach and could not believe our eyes. There were Magnificent Frigatebirds! An entire family! The nature channel calls them the Pirates of the bird world because they steal other birds catch. Funny as it was, we saw these mischievous birds hanging out on a pirate ship docked in the bay! I could not make that stuff up… We did not however, witness any of their crimes. All we saw is them trying to catch their own fish. We also saw a Brown Booby and a few Royal Terns. They were all pretty far away so the photos are not great.

I was craving a Bloody Mary. I call it my vacation drink because I only order them while on vacation and only in the morning. It took quite a while. I don’t think they knew what it was I was requesting. After about 20 – 30 minutes later, I had my Bloody Mary with a celery stalk and all. It was a great attempt but not the best I ever had. 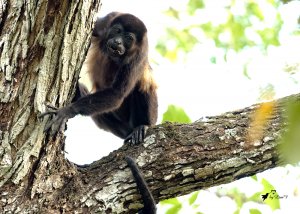 Later in the afternoon, I had an appointment to take a yoga class on the deck behind the gym. It was just the yoga instructor and myself. During the middle of the session, I looked up during a pigeon pose, and I saw an entire family of Howler monkeys watching us. They appeared to be attracted to the yoga music and were stretching along with us. Chris did not believe that part but I watched them copy us. I talked to them and they came closer. At the end of the session, I ran and got my camera, and Chris. (Our room was very close.) I took pictures of them playing as I continued to talk to them. It was a difficult angle to shoot, because it was directly into the sun, but I did my best. The large male started throwing sticks at the yoga instructor. For some reason they only threw sticks at her so I just kept taking pictures. It was an amazing experience! There were 6 in all, a large male, a mother and a smaller male. (I assumed he was a teenager.) Then there were 3 babies of all different sizes. The smallest was carried by the mother most of the time but was allowed to climb on its own, but not too far from mom. These were the first wild monkeys we had seen in Costa Rica. I was starting to wonder why we hadn’t seen any. There were Spider monkeys at the last place we stayed but we never saw them. 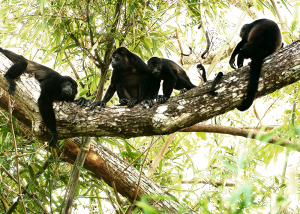 Later that evening we had reservations at the nicer of the 2 restaurants. I could not wait to have the Sea Bass. I started with a cold lettuce, cucumber soup made with Leche de Tigre, “Tiger’s Milk”. I noticed tiger’s milk was a very common ingredient used in Costa Rica. I assumed it was a type of coconut. I was wrong. I know… That doesn’t happen very often. Haha I looked it up to find out tiger’s milk is a citrus based marinade that cures the seafood in ceviche. Since we had serval different types of ceviche, we obviously liked it. I gave every dish a citrusy, tart, slight tangy flavor. The Sea bass did not disappoint either. It was cooked perfectly. Chris ordered a Filet Mignon that was also cooked perfectly. A perfect ending to another perfect day!

We relaxed the rest of the evening in the hammock and read. It doesn’t get any better than that!